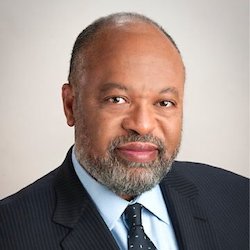 He was the lead trainer for the National Minority Supplier Development Council (NMSDC) for 24 years which has positioned RGMA to have trained more supplier diversity professionals than any other firm worldwide. Current and former RGMA clients include DuPont, Dow, United Airlines, McDonald’s, Walmart, UPS and Major League Baseball.

Ralph Moore is the author of the RGMA Five Levels of Supplier Diversity maturity model which has been embraced as the gold standard for benchmarking supplier diversity initiatives.  His global assignments include conducting seminars in South Africa, France, United Kingdom and Canada.  Mr. Moore is also a member of the Procter & Gamble and Macy’s Supplier Diversity Advisory Councils.

Mr. Moore is highly respected for his civic engagement and has served on over a dozen civic boards including City Colleges of Chicago, University of Chicago Medicine and the Chicago History Museum.  He has received many awards and recognitions, including the coveted National Minority Supplier Development Council Leadership Award.

We are in a pivotal moment for addressing sustainability. How we can leverage procurement spend to address the deficiencies in our social and economic system that have been laid bare by the coronavirus crisis?  Today’s mainstage will feature two keynote speakers  — anchor purchasing advocate Ted Howard of the Democracy Collaborative and supplier diversity pioneer … read more >>